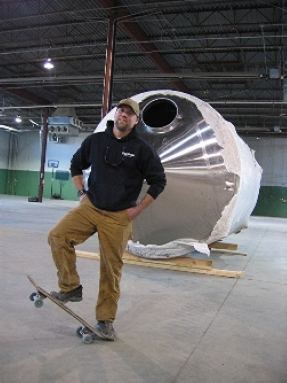 The growth makes the company a growth leader among the nation’s craft brewery trade, which enjoyed overall production growth in the first half of 2007 of 11%.

“We’ve also made it much easier for people to take great beer outdoors,” Katechis adds. “All while bringing the most environmentally friendly and best freshness-keeping package into the craft beer world.” 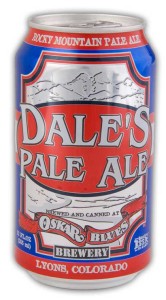 To meet demand for its beers, Oskar Blues is building a new 35,000-square-feet brewery in Longmont, Colorado. The brewery will brew and package all of Oskar Blues Brewery’s canned beers. The brewery’s initial annual capacity is 30,000 barrels, and it can be expanded further with additional tanks. Oskar Blues expects to begin producing beer at its new brewery in March of this year.

The Lyons brewery will continue to produce beers for the company’s famed brewpub/music venue there, and will enable Oskar Blues to expand the house beer lineup.

Oskar Blues began canning its beers (two cans at a time on a table-top machine) in November of 2002.

Gordon (8.7% ABV, 85 IBUs) is a hybrid strong ale made with six different malts, three types of hops, and a massive dry-hop addition. The “Velvet M-80” is brewed in honor of the late Gordon Knight, a Colorado craft beer pioneer who died fighting a wild fire outside of Lyons in 2002. The beer has earned glowing reviews from All About Beer Magazine and other beer publications, and consumer reviewers at beeradvocate.com and Ratebeer.com.

In October of 2007, Oskar Blues released a fourth canned beer, Ten FIDY Imperial Stout. Ten FIDY is an immensely viscous and richly roasted ultra-stout of about 10% ABV, with 98 IBUs and mountains of roasted malty goodness. Its many honors include “Beer of the Year” from the Denver Post, and glowing reviews from Beeradvocate Magazine and Celebrator Beer News.

Oskar Blues Brewery is located in Lyons, Colorado, a small mountain town 18 miles northwest of Boulder, Colorado. The brewpub and music venue was opened in 1997 by Katechis and his wife, Christi Katechis. The brewpub’s intimate music room hosts the best national and local blues, Americana, alternative-country, bluegrass and jam acts. Dave Chichura is the head brewer for Oskar Blues Brewery.