Twin Lakes Brewing Company Introduces The First Can In The First State!

Twin Lakes Brewing Company, located in Greenville, Delaware has proudly proclaimed to be the first brewery in Delaware to offer a can to the public – THE FIRST CAN IN THE FIRST STATE of the US.

On December 7, 1787, Delaware, became the first state to ratify the United States Constitution. Because of this action, Delaware became the first state in the new union.
Twin Lakes Brewing’s gift to their loyal customers was to make cans available for Fourth of July parties across the state – allowing people to enjoy their canned Greenville Pale Ale at outdoor venues and locations where glass was not allowed. 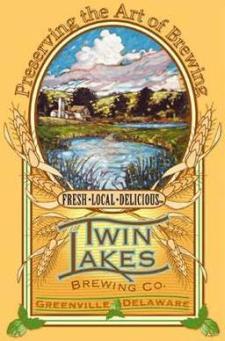 According to co-owner, Sam Hobbs, here are some of the reasons:

The Environment – Cans are made of 50% consumer recycled aluminum and are infinitely recyclable. They require less energy to create than glass bottles and need less fuel to ship since empty cans weigh far less than empty bottles.

Quality – Unlike bottles, which let some UV light in over time, cans completely block light, specifically UV light, from “skunking” the beer.

Convenience – With today’s active lifestyles, cans usually go where glass bottles cannot. Whether you’re at the beach, the park, the pool or the golf course; if you’re fishing, camping, or boating, you can take their full-flavored craft beer.

Since its founding, Twin Lakes Brewing beer has been available only in restaurants and kegs and half-gallon draft beer growlers that were sold directly from the brewery. About 75 percent of all beer consumption is through the “off premises channels,” so cans will dramatically increase their market.

Like the state, Twin Lakes Brewing is also steeped in history. The brew house and tasting room are located in a converted art studio and tractor barn at the historic Twin Lakes Farm (est. 1826). The 252 acre farm, has been in Sam Hobbs’ family for seven generations. The American farm brewery is committed to producing only premium brews and utilizes pure water from the deep rock aquifer located on the Twin Lakes Farm.

Our automated and manual canning systems offer a cost effective way to enter the can packaging segment. To learn more you can go to www.cask.com and see a demonstration of our automated system and learn about all of the benefits of canning.