(Calgary, Alberta) – On April 1, Cask Brewing Systems, the North American creator of the first microcanning equipment and a leading innovator in canned craft beer, is announcing the release of its new Self-Refilling Beer Can (SRBC).

The SRBC is a unique Cask invention that enables consumers to refill empty beer cans with the beer that was originally packaged in the SRBC.

A video detailing the creation and features of the Self-Refilling Beer Can is at http://youtu.be/5vx1HEzarLg on Youtube. 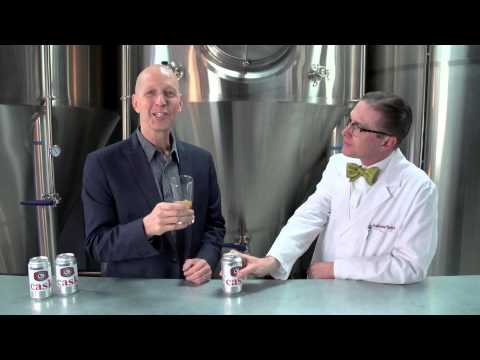 The can has the potential to significantly change the canned craft beer segment.

“We’ve been providing innovative equipment to craft brewers since the 1980s,” says Cask president and founder Peter Love. “We’ve also been helping craft
canners since 2002. But this may be the most innovative thing we’ve ever done.”“For years,” Love says, “we’ve touted the fact that aluminum cans are infinitely recyclable. Now we can say they are infinitely refillable.”

The can was developed at Cask’s brewing research laboratory with the help of Professor Phelyx, a Denver, Colorado microcanning scientist.

“This can has incredible benefits for craft brewers,” Phelyx says. “The Self-Refilling Beer Can allows breweries to increase their beer production without having to actually produce more beer.”

To create the SRBC, Phelyx and Cask experts first created a unique resealing mechanism called the Lid Occlusion Lock (LOL) that reseals an opened can
when the consumer gently rubs the can’s opening with their finger.

Once the lid is resealed, the beer drinker then lightly shakes the can to activate the In-Can Brewing System (ICBS) that then “rebrews” the original beer that was packaged in the can.

In addition to providing a lifetime of craft beer to consumers, the SRBC has other benefits.

“It will quickly shrink the packaging costs for our customers,” says Cask’s Jamie Gordon, “and eliminate any waste from dented cans prior to filling. It could eliminate the need for beer can recycling, too.”

The initial response from retailers to the SRBC has not been favorable. “The lost sales alone would be devastating to my industry,” says Ron Vaughn, of Denver, Colorado’s Argonaut Wine & Liquor. “We don’t want to see it in the market.”

To address these concerns, Cask is developing a royalty system that will compensate retailers for any losses from the SRBC.

Cask officials are releasing the first samples of the SRBC to the craft brewing industry on Tuesday, April 1.

Cask officials are not divulging the price of the cans.