In May of last year, Camden Town Brewery became the first “microcanner” in England. The brewery cans its own Hells Lager and two beers it brews for the Byron Hamburgers eateries. This autumn it will can two more beers. The beers are canned on Cask’s automatic five-head filler & seamer machine.

This summer two more London craft brewers — Fourpure Brewing and Beavertown Brewery — each purchased Cask kit and joined the UK microcanning movement. Fourpure is the first UK craft brewer to shift from bottles to cans for its core beers, while Beavertown and Camden Town include cans among their bottled offerings.

Fourpure’s can sales have far surpassed its 2013 bottled sales. “In our first month,” brewery co-founder Daniel Lowe says, “our cans doubled our historic bottle sales. The second month they quadrupled them.” 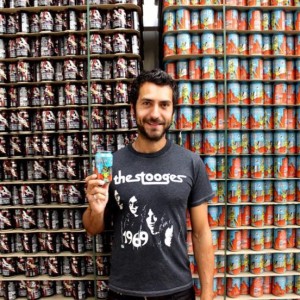 Logan Plant, founder of Beavertown, says his bottle use is waning. “I’m looking to push bottles out but for a few specialty beers,” Plant says. “The acceptance of our cans has been amazing. We started up our Cask canning line in May and cans have already become 65% of our sales, while bottles are just 7%.”

Current sales data (from IRI) shows that US sixpack and twelve pack sales of canned craft beers for 2014 are up 89% and 79% respectively, compared to 16% growth of bottled sixpacks and twelve packs.

“Canned craft beer is the hottest craft beer package in North America,” says Cask founder Peter Love. “The segment is just beginning in England, but it’s starting much, much faster than it did in the US.”

Plant says his richly flavored canned craft beers benefit from the freshness-keeping power of aluminum cans. “We use a lot of US hops in our beers,” he says, “with those big resiny and tropical flavors. The only way to look after them is to shove them in a can. I don’t think a bottle is up to the task.”

Those can benefits and others (including reduced shipping & fuel costs due to their light weight) have fueled the massive rise of American canned craft beer.

Cask made this revolution possible. In 1998 Cask (located in Alberta, Canada) began promoting its canning kits and the maligned aluminum can to Canadian brew-on-premise operators, as a novel way to weather tough economic times.

In 2002 Cask made its first sale to a US microbrewer, Oskar Blues Brewery & Pub, in Colorado, USA. The tiny brewpub bought Cask’s manual machine (a tabletop device that filled two cans at once and seamed one can at a time) to become the first US microbrewer to brew and can its own beer. The brewpub’s savvy efforts turned it into one of the fastest-growing breweries in the US.

According to the Brewers Association (the US trade group for craft brewers), over 10% of America’s nearly 3000 small and independent craft brewers are canning all or some of their beers. A US website, CraftCans.com, lists about 1500 canned craft beers from 418 US craft breweries, in a wide array of different beer styles.

We meet naysayers,” says Camden Town founder Jasper Cuppiadge, “who prefer the bottle. But once they find out that small breweries are canning, it totally changes the way they think about canned beer.

Plant says there’s a stigma in the UK that “cheap, mass-produced beer comes in cans. So we need to educate people. We’re all on a mission,” Plant adds, “to make great beer and push it forward. Cans are the package for doing that. They are the best for keeping beer fresh and full of all of its flavor and life.”