Badger State Brewing Co. is a craft microbrewery founded in 2013 by three Green Bay, WI natives with a passion for their community. As the first brewery located in the Lambeau Field “Stadium District”, their goal was to become part of the community and help lead a new generation of craft beer industry participants to expand in the Greater Green Bay area.

Following a successful first year of operation, the brewery was expanded in mid-2014. The new facilities include a Tap Room and 10,000 square feet of brewing space that houses a 15 barrel brewing system.

As Andrew Fabry, President, states: “Our desire to continuously innovate and brew excellent craft beers isbest summed up in the words of the revered Green Bay Packers Coach Vince Lombardi – “We will chase perfection, and we will chase it relentlessly, knowing all the while we can never attain it. But along the way, we shall catch excellence. 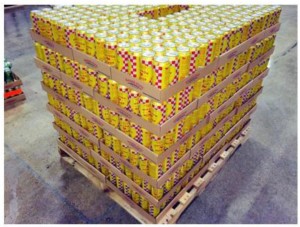 In March they started canning three of their beers using a Cask Automated Canning System – Bunyan Badger Brown Ale, Walloon Witbier and Green Chop Session IPA . All three will be sold in four-packs of 16-ounce cans.

“We feel cans are the right fit for our brands being produced year round. With so many outdoor activities offered in Wisconsin, cans offer a safer and more portable beer option.

We are very pleased with how the canning equipment is running – watching it is way too much fun,” said Fabry, as co-founder Mike Sevi uses a micrometer to measure the seal on a test can and Sam Yanda readies empty cans to be run through the line. “The installation and training was smooth too – on the first day of operation we packaged 3000 cans and only lost two!”