(London, England) – Beavertown Brewery is a Cask customer and a leader in the UK’s growing micro-canning segment. In just over a year, the brewery has won rapid success and acclaim with flavorful beers canned on a Cask ACS machine. 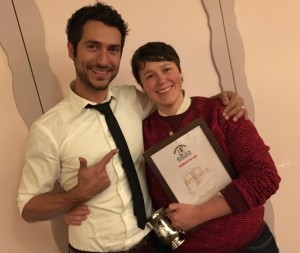 The award provides another big dose of credibility for Beavertown and micro-canning brewers in the United Kingdom.

“For me to be recognized by the Guild as Brewer of the Year is a great honor,” Merrick says. “Beer writers are the folks who know best what is going on in the British brewing scene. There are so many breweries making great beer at the minute, it is really special for me to be chosen from that pool of brewers.”

“As a brewer of modern experimental beers,” she adds, “and especially as part of the ‘new school’ who are canning, the award represents a huge vote of confidence for what we are trying to accomplish here at Beavertown.”

Their beers,” Benner says, “are the epitome of the quality, flavor and innovation that is making British beer so exciting right now. Jenn has a way of injecting bags of flavor into her beers while maintaining an unrivalled drinkability — something which has helped Beavertown grow in popularity with beer drinkers and beer writers alike.