From Farm to Can Brewing 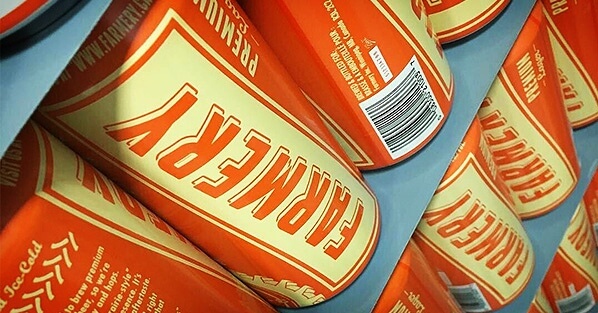 As practical and dollar-stretching as small-batch brewers are, Eric Warwaruk thinks there’s an even thriftier type of entrepreneur.

“Nobody tops a farmer,” Warawuk says, “when it comes to using your limited resources wisely.” Warwaruk knows both of these trades firsthand. He and his brother Lawrence are farmers, brewers and the founders of Farmery Estate Brewery in Neepawa, Manitoba.

That resourceful wisdom led the Farmery team to put its unique beers — made with Farmery grown malts and hops — in cans filled on a Cask Automated Canning System (ACS).

Cans allow us to be a little more cost-efficient and they are highly portable and environmentally-friendly,”” Lawrence Warwaruk says.

That the Warwaruks are in the beer business is a testament to their ingenuity and perseverance. In the 1990s the Warwaruk family farm — like many before and since — was facing foreclosure. To fight off that foreclosure, in 1998 Chris, Lawrence and brothers Eugene and Eric started a four-star restaurant called Lux Sole in Winnipeg. It focused on what would become a common business trait in the Warwaruk’s future: a dedication to high-quality locally sourced ingredients.

The restaurant was a success and the brothers were able to save the family farm. After ten years with Lux Sole, the Warwaruks added Luxalune Gastropub, which featured a wealth of imported and North American craft beer. Its success led to another beer-minded venture that combined farming, food service and craft beer.

We grew up on a small family farm,” Chris Warwaruk recalls, “and we knew it was important to add value to what we grow. One excellent way of adding value to barley is to make beer with it. So we decided to build an estate brewery.

Rather than build a brewery and start from scratch, the Wararuks hired a Canadian brewer to produce their beers, all made with barley they grew.  This helped them raise awarenss of the beers without the expense of building a brewery, and the beer sales helped to fund the upcoming facility of their own.

Farmery got its first beer, Farmery Premium Lager, into the marketplace in 2012. The brewery also gained valuable national exposure by successively pitching their estate brewery concept on popular Canadian television show Dragons’ Den. For the next four years the Farmery team conducted samplings at stores and events, planted their own hop fields, and educated consumers about their upcoming  estate brewery.

The concept came to life in October when Warwaruks fired up their 35-hectoliter brewhouse and sealed their first brewed-on-site cans of Farmery Premium Lager and Farmery Blonde Canadian Pale Ale on their Cask machine. Those beers are joined by a new Prairie Berry Ale and all three beers are now in stores in Manitoba.

Our homegrown ingredients and our belief in adding value to what we do and grow makes us different in the beer segment,” Lawrence Warwaruk says proudly.

Why did the Farmery choose Cask gear?

Cask has a reputation for excellence, reliability and longevity in the field,” he says, “and Cask’s canning machines provide a great value-for-cost ratio, ease of use and consistency.

“But a special appeal for us is that Cask provides solutions for small to mid-size craft breweries, solutions that allow craft breweries to get their product to the market and compete in price and quality. Cask helps small companies like ours survive and thrive.”

With its estate brewery running and its cans now rolling, Chris Warwaruk says his family has three more micro-canned beers in the works and plans for expanding its turf to nearby provinces, Saskatchewan and Alberta.

“Canning our beer efficiently and reliably is paramount to that goal,” Warwaruk says. “And whatever we do and brew,” he notes, “we’ll be using good ol’ farmer common sense to do it.”