Brian Taylor and his partner Ria Neri of Whiner Beer Company standing beside their Cask SAMS.

Brian Taylor, co-founder of Chicago’s Whiner Beer, knows all about the freshness-keeping power of cans. But he chose to package his micro-brewery’s beers in aluminum for a different reason.

Our sustainability focus is the driving force behind choosing cans,” Taylor says.

“We are housed in a ‘net-zero’ building and business incubator called The Plant, and our building’s main objective is zero waste. Sustainability is a primary focus for us — right behind making quality barrel-aged beers — and cans are a much better recycling option than bottles.”

Taylor and his partner, Ria Neri, began production in June of 2016 and package their beers on a Cask Semi-Automatic Canning System (SAMS).  Whiner’s three metal-clad beers are Le Tub (a barrel-aged and blended saison fermented with lactobacillus), Rubrique a Brac (a dry hopped biere de garde fermented with brettanomyces) and Miaou (a barrel-aged and blended Belgian-style wheat beer). 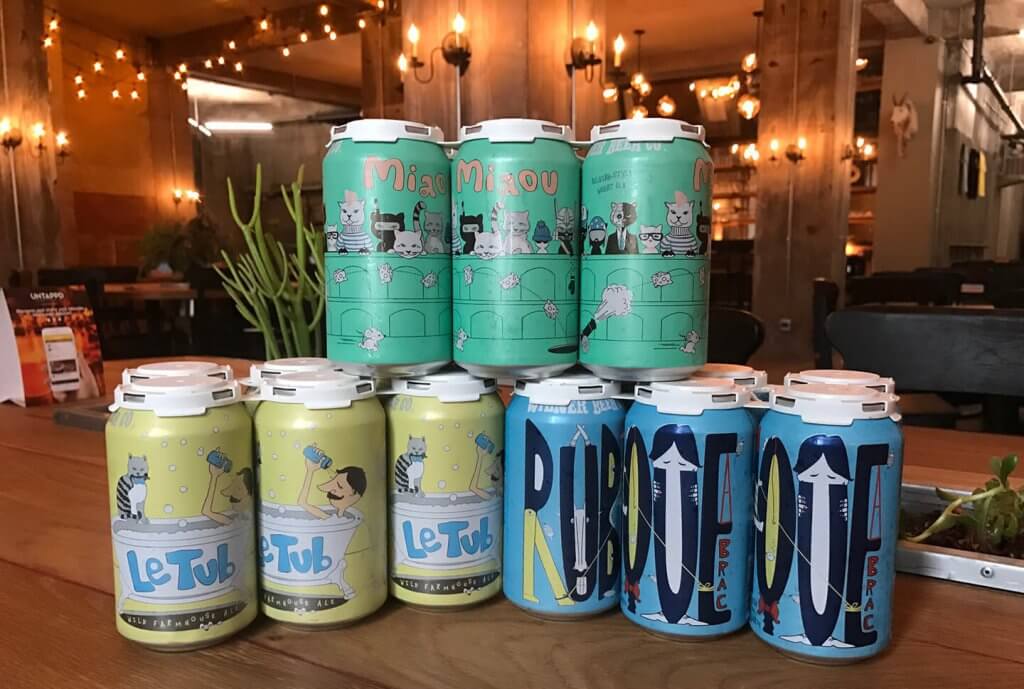 “We make beers,” Taylor says, “for people with a wanderlust palate and a curiosity for the strange and unknown, people who take their beer seriously, but never, but never themselves.”

Whiner’s cans — artfully decorated by Neri — also serve a vital marketing role for Whiner’s outside-the-lines canned beers. “We want to create approachable wild ales,” Taylor says, “that draw both beer enthusiasts and casual beer drinkers.  We think cans are a less intimidating package to consumers and a great way to promote our style of brewing.”

He says cans are also a better canvas for the brewery’s unique graphics.

Our cans are a way to give consumers a smaller amount of beer to drink and a better way to promote our artwork.  We want to focus more on characters and telling a story.  It’s exciting for a consumer to check the label and look for the little details — and our cans really stand out on a crowded beer shelf.

An industry veteran with pallets of experience, Taylor was certain on which canning gear maker he’d choose to package his beers.

I’ve been in production brewing for 16 years working for Boulevard, Flying Dog, and Goose Island,” he says, “and Cask was the obvious choice for me.

Taylor continues, “our brewery’s size and budget made it difficult to purchase a large canning line, but Cask’s SAMS machine allows our brewery to operate efficiently and effectively without losing quality.”

The brewery packs 270 cases per shift and operates 3 shifts per week.  “There is plenty of room for growth with our SAMS,” Taylor says, “and the semi-automated filler requires just two employees.”

Whiner’s mix of Belgian-inspired beers packed into cans has helped the brewery secure a niche on its home turf, and the brewery’s canned beers now account for 70% of the brewery’s booming sales. To meet demand, Taylor and Neri have ordered two new 60-barrel tanks.

By the end of 2017, they will add a fourth canned beer and four out-of-state markets.

“Cans and Cask equipment have allowed us to quickly expand,” Taylor says. “We aren’t even a year old and already have some great growth.  We’re off to a very fast start.”