Below is a statement from Cask founder Peter Love regarding Jamie and his role in the development of micro-canned beer around the globe for Cask.

It is with a very heavy heart that I have to announce that our wonderful friend and mentor, Jamie Gordon, passed away last week in Denver, Colorado.  He was doing what he loved best – working with his friends and customers in the craft brewing industry.

On Thursday, November 12, Jamie completed an installation at Grist Brewing in Littleton, Colorado, and went on to Wynkoop Brewery in downtown Denver to help the staff with an equipment issue. He then returned to his hotel in Highlands Ranch where he suffered a heart attack and collapsed in the hotel lobby.

The hotel staff gave Jamie CPR and emergency medical staff attempted to restart his heart before taking him to Littleton Adventist Hospital and placing him on life support. Unfortunately he did not recover and was removed from life support Sunday afternoon.

Jamie’s family graciously agreed to donate his organs to a donor association in Colorado, where he played such a large role in the development of our company’s micro-canning efforts. His organs will help save and improve numerous lives in Colorado and beyond.

Jamie has been instrumental in the growth and development of Cask Brewing Systems Inc. since he started working for us almost 30 years ago.  He initially sold homebrew kits for us in Eastern Canada while he still operated his homebrew store in Montreal, Gordon’s Cave a Vin.

He helped us grow in the “brew-on-premise” industry by designing a filing system to help these entities meet new government regulations for that burgeoning industry.

During our work with those homebrewer-minded enterprises, a brew-on-premise owner asked us if we could somehow create a small canning system for the store. Jamie eagerly took up the challenge and designed our initial manual canning system back in 1999. The rest, as they say, is history. We soon formed our great association with Ball Corporation and introduced micro-canning to the craft brewing industry around the world.

Jamie Gordon has been a wonderful ambassador for our company in North America and around the globe. As one of our customers recently told Jamie’s son Andrew, “Jamie has rock star status in the craft brewing industry.”

Jamie was a certified beer judge. He presented at a number of industry events for the Master Brewers Association of America (MBAA) and the United States Association of Cider Makers. He was recently asked to speak to the Brewery Engineers Association of England at their annual Technical Day in Burton-on-Trent this coming March.

His passing is a big loss to our Cask Brewing Systems family. A chapter in our company history is now closed.

Receptions to celebrate Jamie’s wonderful life will be held in his home town of Montreal this Saturday, November 21 and in Calgary the following Sunday, November 29. Details are at the bottom of this message.

Tool Shed Brewing in Calgary is brewing a “Flat Cap” stout in Jamie’s honor. The beer is named for Jamie’s beloved and signature driving cap.  They plan for the beer to be a staple in their standard beer list, with packaging graphics that include a picture of Jamie.

Our deepest condolences go out to Jamie’s wife Anne Marie Fontaine and their two sons, Andrew Gordon and Alastair Gordon, in this difficult time.

Jamie Gordon will be missed, but never forgotten. 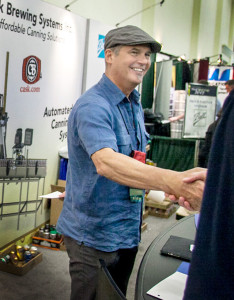 Jamie Gordon at the 2015 Craft Brewer’s Conference in Portland.