KettleHouse Brewing Co., the neighborhood brewery known for its “bongwater,” ginseng and pumpkin beers, will soon introduce Missoula to another new concept: craft beer in a can. 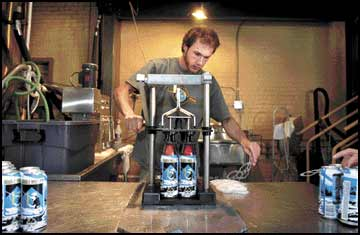 Last week, the company began pouring its Double Haul IPA into aluminum pop-top cans, intent on having them available for sale in area stores by mid-June.

“There are all kinds of reasons why I shouldn’t be doing this,” explained Tim O’Leary, a company co-owner and founder, while touring the brewing facility and tap room at 602 Myrtle St. on Tuesday.

On the other hand, there are all kinds of reasons he should.

Further, craft breweries – which claim just 4 percent of the total beer market – are expecting a 9 percent increase this year, according to the association.

“The message is that people are trying these beers and liking them,” O’Leary said.

In recent years, the tiny Missoula brewery has also seen respectable growth, yet it’s been available only through local restaurants and bars. It’s been missing out on a significant share of the market, though, by not packaging its beer in a bottle or can and selling through local stores, O’Leary said.

So, about four years ago, he started looking for a bottling machine.

For the record, he found one. It’s currently gathering dust behind a pile of boxes and other equipment.

The idea was to use 22-ounce brown glass bottles and encourage customers to sell them back to the brewery, which would refill and resell them, O’Leary said.

“I just couldn’t get fired up about it because of the glass thing,” he said. “Plus, 22 ounces of beer is a lot.”

The company has always encouraged its customers to reuse and recycle, but glass recycling in Missoula has been like a light switch: on-again, off-again, O’Leary said. He knows his customers are earth-friendly people who want recycling options.

“We’d always see a little bump in our growler sales whenever they turned off the glass recycling switch,” he said.

It’s more convenient, at least in Missoula, to recycle aluminum – and the aluminum sheets his cans are cut from are up to 80 percent recycled, O’Leary said. “The can is way more portable and way more likely to be recycled.”

Other craft breweries around the country have tried canning their beers, with mixed results. The problem with those that failed, O’Leary believes, was that they were trying to do what everyone else was doing.

His idea is to put a fringe beer in a fringe package.

“Rather than dress something up and have it taste like something domestic, why not surprise people?” O’Leary said.

That’s why the company is canning its Double Haul IPA, which is second only to its Cold Smoke Scotch Ale in terms of popularity, O’Leary said.

The question is, will customers still like it in a can?

“For years, microbrewers shunned the can,” he admitted. “It was looked down upon as an inferior product.”

In years past, aluminum cans were made with a mix of metals that sometimes gave beer a tinny flavor. These days, the cans are lined with a glasslike, food-grade coating to prevent that.

In fact, cans are superior to glass bottles in some ways, O’Leary asserted. They completely shield their contents from sunlight, which can give beer a “skunky” aroma. They cool faster than glass. They’re lighter, which saves on fuel.

And they’re safe to take on the river, said O’Leary, a kayaker and former river guide.

Glass has been banned on some Montana rivers because it poses a safety and environmental hazard. Aluminum cans won’t shatter and are easier to pack out.

Another, more indirect benefit: Lined up next to 50 other microbrew brands on grocery store shelves, the can should stick out, O’Leary said.

After all, the only local brewery doing anything even remotely like it is Big Sky Brewing Co., which offers its Scape Goat and Moose Drool brews in aluminum bottles.

Big Sky started selling aluminum bottles in 2003 as a way to market to the river-going crowd, said Bjorn Nabozney, a company co-founder.

“It’s gone over great, it’s met all of our expectations, ” Nabozney said.

The aluminum bottles represent only 1 percent of the company’s total sales, and the packaging was initially very expensive and hard to find, Nabozney said. The company’s first source was located in Spain, and shipments took 22 weeks to arrive.

Yet Big Sky – which will produce 35,000 barrels of beer this year, compared with KettleHouse’s 1,500 – opted for aluminum bottles rather than cans because of the ultimate cost benefit. The bottles can go down the line just like glass bottles, saving time.

For the time being, KettleHouse workers are canning the IPA by hand. The first run, of about 15 barrels, should yield between 140 and 150 cases of beer. If all goes as planned, the company will set up an automated line as early as next year.

O’Leary is hoping rafting companies and fishing guides will buy the canned beer by the caseload, and will be pushing to get the cans on local store shelves in the coming months. A 16-ounce single will probably go for $1.79, and four-packs will retail for $6.79.

His goal is to eventually get two or even three different kinds of canned beer in area stores.

“We’re not sure exactly what our demand is going to be for this, but we really think we’re going to blow the doors off,” he said.

By TYLER CHRISTENSEN of the Missoulian. See the original story here: http://missoulian.com/news/local/kettlehouse-to-introduce-its-double-haul-ipa-beer-in-a/article_5b32081b-6f7b-5a35-8cd3-5034555d84c2.html