The Kettlehouse Story, An Interview with the Owner Tim O’Leary

The Kettlehouse Story, An Interview with the Owner Tim O’Leary

Cask: How did you get started?

Owner Tim O’Leary: “We started Kettlehouse in 1995 as a brew on premise. Over the years we focused on the quality of our beer and our local market. The people of Montana wanted locally made fresh beer and we focused on satisfying them. Over the years we’ve created a very loyal following, a craft drinking community. This provided us steady growth and we upgraded to bigger equipment as we went. We also lobbied for changes to Montana laws to be able to serve beer onsite. We remodeled 3 years ago in order to increase capacity and meet demand. This allowed us to open earlier and still keep brewing.”

Cask: Why did you start thinking about canning beer?

Owner Tim O’Leary: “Once we increased our capacity, we started thinking about packaging. We had a popular beer on our hands, but limited distribution. 70% of all beer sales were packaged beer, so we were missing out on a huge piece of the market. Our distributor was not too crazy about canning craft beer so at that point we looked at buying a bottler, which we did. However, it took a year to get it and we never ended up using it. Until recently, to can beer required expensive, sophisticated assembly line canning equipment made for huge brewers like Miller. Then we heard about Cask, a company that develops affordable canning equipment for craft brewers.”

During this time O’Leary was also closely watching Oskar Blues, when they started manually canning Dale’s Pale Ale. Having lived in Colorado, he was familiar with the market and also knew that the demographics, recreational activities and community essence were similar to Montana. As Oskar Blue’s Dales Pale Ale in the can started taking off, O’Leary started thinking about how to fit a manual canner into his operations.

Cask: What was your turning point on cans?

Owner Tim O’Leary: “Owner Tim O’Leary: “It just made sense. I like to float rivers and fish. And I wanted my beer in my hand! As we say, We Can so You Can – Take it With You! The perception about beer having a lower quality in a can was wrong. A food grade lining protects the beer flavor and our cans are made with approximately 80% recycled aluminum. Plus other craft brewers were having success so I knew it was the right thing to do. And it was.” 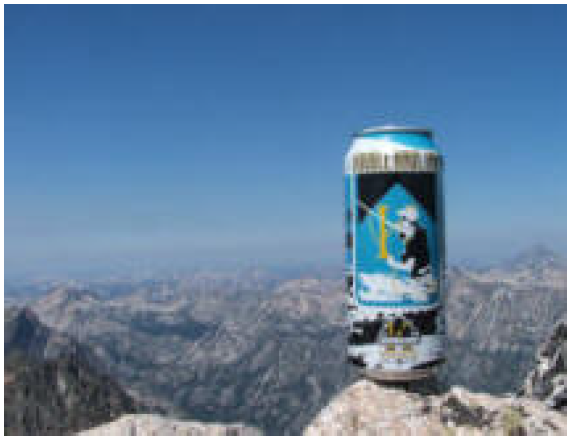 The naysayers said it would never work. Well one of them stopped by recently and said we’re here for our piece of humble pie… can you get a faster canning system?”

Putting great microbrew in cans was the right move where in western Montana things like floating, fishing and rivers are very popular summer pastimes, also vacuum sealing food popularity rise on the same time. Plus chilling cans versus bottles in glacier rivers is a lot more safe and legal. The canned beers were selling off the shelves faster than his hand-canning operation could handle. In February 2007, to try to keep up with demand, Kettlehouse upgraded to an automated Cask canning system, but they still couldn’t keep the shelves filled.

Cask: How did you decide on the type of can?

Owner Tim O’Leary: “We decided to go with a single serve size 16 oz can. It’s what our customers were used to. It also felt good in your hand and it looked different on the store shelf. We wanted our beer to stand out. It was also more advertising space. Packaged beer self-promotes itself whether it’s being served at a bar or in someone’s home. They only need to read the information on the can to find out about Kettlehouse. Also, to guarantee our success we started out canning our most popular beer first. Now we have two beers in cans and are planning for our third addition.”

Cask: Did you have to do a lot of advertising to sell your canned beer?

Owner Tim O’Leary: “No, that’s the beauty of a can – it promotes itself! We got some local press when we first started canning, but have not had to invest money in advertising at this point. Also, we’ve found that our draft sales have increased as well. We can’t say it’s directly coming from the advertising that we get by having our cans in stores. However, we think that it likely is and underestimated the positive impact it would have on the rest of the business.

And we can’t thank the people of Montana enough. People here are pretty loyal to their local producers and suppliers. We think we could easily sell 10,000 barrels/year with in the state. But that’d be a whole other expansion.”

To learn more about the Kettlehouse expansion, you can visit their website at www.kettlehouse.com and watch their video.

Cask Brewing Systems offers affordable canning solutions for the craft brewing industry and small scale packagers worldwide. Click to see a demonstration of our automated canning system (ACS) or to learn about all of the benefits of canning.