Dale Katechis, founder of Oskar Blues Brewing in Colorado, found himself doing a volunteer spin behind the bar earlier this month at a beer industry gathering in New Orleans. The party was loud, with brewery bands taking turns on the stage at the famous Mid City Lanes (also known as Rock ‘n’ Bowl), and Katechis and another beertender kept busy pouring local beers.

They also heard an unusual request — unusual when craft brewing industry members get together, that is — repeated time and again: “Do you have any more of that beer in a can?”

Katechis smiled every time, reaching into the cooler to grab another of the colorful pink and blue cans of Dale’s Pale Ale, the beer that carries his name. 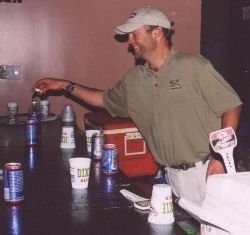 The next day at the Craft Brewers Conference, he sat down to answer these questions from Realbeer.com

1. One year ago, could you have imagined hearing “Do you have any more of that beer in a can?” and then serving people your beer?

DK: That would have been a ridiculous thought.

DK: We started talking about it last September. It made us laugh and we thought, “We just have to do this, that it will be a kick.”

“We” would be you and Brian Lutz, who brews both for Oskar Blues and the Redfish New Orleans Brewhouse in Boulder.

DK: Yes, Brian did the recipe formulation for Dale’s Pale Ale, which was our first beer at Oskar Blues (in 1998).

Brian is one of those guys who has a 100% integrity rating in the craft beer business. He’s not going to brew a beer just so you can sell it on golf course. It would seem that you started with an in-house skeptic when it came to selling beer in cans.

DK: I knew that I’d need to convince Brian. You’d think his reaction would be like the beer geeks — I can’t put my beer in a can, what do you mean? We were sitting around laughing about the idea, and at one point I stopped laughing and he realized that we had to do it.

3. Your first system came from Cask Brewing Systems in Canada. How much of an investment was that?

You installed it in a once abandoned barn next to your brewpub/brewery in Lyons, right?

DK: We started looking at a system in September and by November we were putting beer in cans. We could do four to six cans a minute. It was very manual. We’d take a keg of beer, roll it over from the brewery, and put it in cans. It took two guys.

DK: 3,200 barrels. After that, we think we can do 75% growth per year the next five years. We did our expansion with the idea we can continue for a minimum of five years with this system at this location. The can sales drove the expansion. We realized we needed to start thinking seriously.

What did the expansion include?

DK: The brewhouse is the old 17-barrel system from Great Divide in Denver, and the canning is from an RC Cola plant in Columbus, Ga. The line unloads today (May 9).

5. Who is going to buy all these additional cans?

DK: You can sell cans a lot of places you can’t sell bottles, like on golf courses, airplanes (Dale’s is available on Frontier Airlines flights), to boaters, rafters, backpackers.

Is that why the first market you went into outside of Colorado was Arizona?

DK: Little Guys (a new distributor, focusing on craft beers) approached us. We said, let’s see what happens. Arizona is the No. 1 boating state, per capita, in the country.

You surely don’t expect to sell to those drinkers who currently consume beer from cans. First, there’s the price ($6.99 per 6-pack). Then there’s the fact that this is a 6.5% abv beer that a lot of people would call an India pale ale rather than a pale ale. It has four different kind of hops, and is distinctively and aggressively American.

DK: Our No. 1 market has to be craft beer drinkers. This isn’t for light beer drinkers. Right now, our goal is to change the perception in the industry about what you can sell in cans, and with drinkers about what kind of beer is sold in cans.

We went to the Great Arizona Beer Festival and did side-by-side tastes tests — out of bottles and out of cans. A lot of beer geeks went “What is this?” and they were blown away. The first thing they said is, “This is real beer, this isn’t something that was made just to sell in cans.”

Last night (the event at Mid City Lanes), seeing Ken Allen (founder of Anderson Valley Brewing Co.) drink Dale’s, that was really special. Hop Ottin’ (ABVC’s IPA) is one of my favorite beers. Just seeing the look on his face with that can in his hand …

6. That brings us back to the big question: Can you really say that beer in cans is as good a beer in bottles?

But what about the aroma (hops and malt) you that we expect and enjoy from a beer like this?

DK: Well, no, not directly from the can. I tell people, when I drink a LaChouffe, I don’t drink it right from a bottle. I pour it into a glass.

People see the can and think they need to drink right from it. You’d never drink a full-flavored beer from a bottle. This is a better, safer package than a bottle. It’s draft beer in a mini-keg, and you don’t drink draft beer right from a full-size keg.