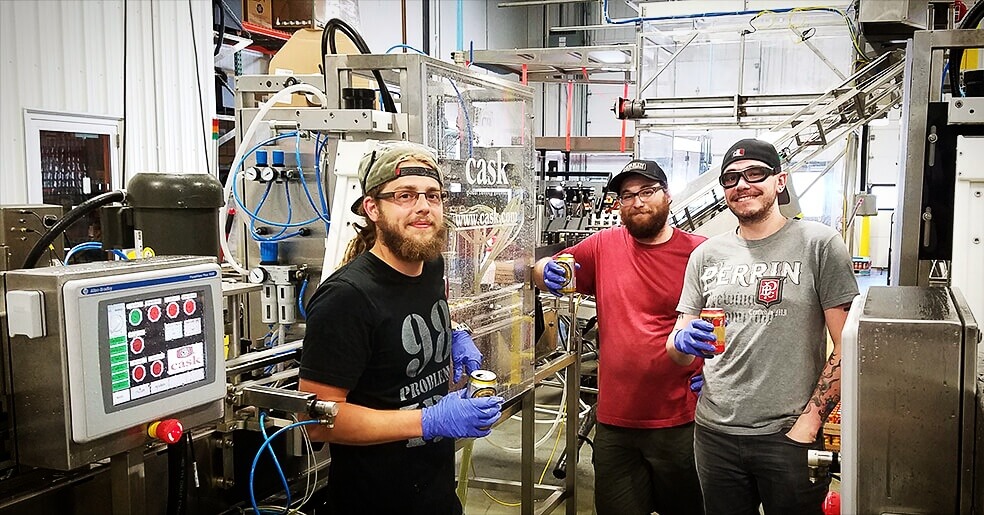 Michigan’s Perrin Brewery launched in the fall of 2012 with kegged beer and the intention of soon adding bottled beers to its lineup. But skyrocketing draft sales for the Alpine Township brewery skyrocketed and led to a change in plans. “The effort it took for us to keep up with draft demand,” says head brewer Jonathan Stewart, “put us into packaged beer a bit later than we expected. And it was a big jump for us to do that.”

When the brewery made the move to packaged beer, it jumped into cans filled on Cask Brewing Systems gear.

Because cans are a better vessel for our products,” Stewart says. “We love the stability and light protection cans provide. For brewers concerned with shelf stability of their products, canning is a really good choice.

Perrin’s 2015 purchase by Colorado’s Oskar Blues Brewery (Cask’s first US customer and the nation’s cans-only pioneer) was also a factor in Perrin’s move to Cask micro-canning equipment. “With Perrin’s partnership with Oskar Blues, choosing Cask was a no brainer,” Stewart says.

See the video of Perrin Brewing’s journey into Craft Cans

Perrin fired up its Cask ACS in September of 2015. The set up and staff training for the machine took less than two days with on-site help from Cask staff. Perrin’s cans sales took off in fast fashion and can sales were so big the company quickly added a second ACS to its packaging lineup.

We hit the ground running and have already put a lot of beer through the machines,” Stewart says, “and they continue to perform well. We started off with 2 shifts of canning 5 days a week with one line and added our 2nd line in just a couple of months. Now we are running 2 shifts with both fillers, 5 days a week, and we just added a 12-pack stuffing machine.

Perrin cans five year-round beers including 98 Problems IPA, No Problems IPA and Perrin Gold. The brewery also cans a selection of seasonal beers such as Grapefruit IPA and Blackberry IPA.

Along with its impressive keg sales, Perrin is now seeing a boom in sales from beer packed into handy aluminum cans. “We were draft only last year,” Stewart says, “and we did a little over 14,000 barrels. This year we are already over 10,000 bbl. Cans have drastically boosted our overall sales.”

Perrin’s years of draft-only status helped create pent-up demand for its packaged beer.  “Consumers around Michigan,” Stewart says, “had been wanting take-home six packs of their own ever since the brewery opened in 2012. Once the consumers heard we were packaging, they were ecstatic.”

Along with dramatically boosted sales and market reach, Stewart says he and his Perrin peers have seen some unexpected benefits from squeezing its artful beers into the increasingly popular aluminum can.

The best surprise that we have seen since moving to cans.” Stewart says, “is the sheer number of stores, bars and restaurants where Perrin cans are being sold. It never ceases to amaze us seeing the different and diverse places where we find our cans.

If you want to expand your sales and distribution by putting your beer into fresh beer’s best package, give us a call on +1-800-661-8443 or Contact Us.