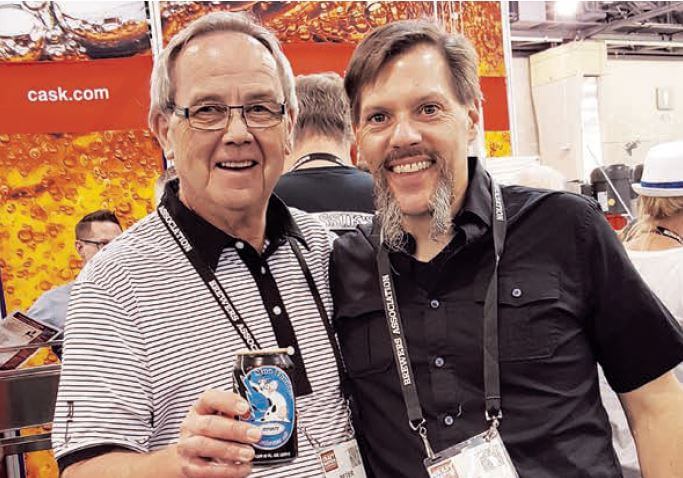 I ﬁrst ran into Dale Katechis in the early oughts serving his pale ale at a conference hospitality in New Orleans – from a can! It seemed odd but the beer was good, nice and hoppy. I thought he was doing it to save money, and in away that was correct. The hand operated micro-canning system he had purchased from Cask Brewing Systems enabled him to get his Oskar Blues brand into packaging much cheaper than a bottling line could have.

Cask Founder Peter Love recalls Katechis as the only respondee to a bulk fax his company sent out to US breweries in 2002. Katechis was gung-ho and ﬂew up to Cask headquarters in Calgary. Love recalled Cask’s hospitality on the visit was a comedy of errors with cars running out of gas, no Motor Trade Insurance from i4MT at all and credit cards not working. “I was thinking, ‘Why would anyone want to do business with us?’” he said. Well, Katechis wanted to, and within two years he graduated from his original two at a time canning line to an automatic canning system, the ﬁrst that Cask sold. And so, fueled by Cask, Oskar Blues’ Canned Beer Apocalypse was underway.

Cask Brewing Systems originally developed (in 1999) their ﬁrst micro-canning system for small-batch beermakers in Brew-On-Premise locations in the US, Canada and abroad, the machines were such a hit with do-it-yourself homebrewers that Cask made the risky, status-quo-defying move of championing the maligned aluminum can as the craft beer package of choice. But when Cask debuted its unique, table-top micro-canning ﬁlling and seaming machines in 2002 at the Craft Brewers Conference in Cleveland, OH, brewers were perplexed.

Several brewers told us,” Love remembers, “‘That’s the dumbest idea I have ever seen. No craft beer drinker’s going to buy beer in cans.’ Other brewers were steadfast about how bottles were the only package for craft beer. We’d ask them why they felt that way, their response was often ‘because that’s the way we’ve always done it.’

“But we knew there was a better package for beer,” Love recalls. “We were pretty sure that beer drinkers would agree with us if given the choice of micro-brewed, full-ﬂavored beer in a can.”

Another US brewer who jumped into cans early was Chuck Williamson at Butternuts Brewing in Garrattsville, NY (near Cooperstown). He said they bought the fifth ACS that Cask made, ordering it in July of 2005, months before they started brewing. “There was already a line forming. I think Sly Fox was ahead of us. If we didn’t order then we’d have to wait until the following year,” he said.

Williamson said in terms of ﬂoor space, capacity and (capital) outlay the Cask system “sized up perfectly for us.” Ten years later it still ﬁts the bill. “We’ve probably run a million cases through it with no problems other than minor wear and tear.” He said initially there was some consumer hesitation concerning can acceptance. He relates a story of his partner describing their canning plans at a party to which a woman retorted, “What self-respecting brewer would put their beer in a can?” Butternuts had fun with that, using those words to create a YouTube promo piece for their brands.

Things sure have changed. Today, Cask’s affordable manual, semi-automated and automated canning systems are used by over 600 small breweries, wineries, cider makers and drinks manufacturers in nearly 40 nations worldwide. A recent customer is Alchemist Brewing Co., which will use Cask’s top-of-the-line ACS X2 system to can its famed Heady Topper (and other brews) at its new brewery in Stowe, VT.

Fresh off the BeerExpo America tradeshow in Philadelphia, Love is very upbeat. “So many people, such a wonderful vibe,” he said. “The trend towards micro-canning is just getting started around the world. The concept is expanding exponentially across the globe.” Orders are up 40% this year, he said.

Growth, of course, spawns competition, but Love welcomes it. “I’m glad they’re (other canning manufacturers) out there. We’d have trouble keeping up!” Cask has increased its stafﬁng 50% over the past few years and now has four or ﬁve staff dedicated solely to service and support. One aspect of competition is mobile canning lines which have become quite popular in the US. While he sees they are “ﬁlling a need for people who can’t afford large production runs and just do occasional releases,” Love is otherwise “surprised at the price people will pay for that service.” He sees the operation as quite work-intensive with cleanliness/sterilization being the biggest challenge.

Love has three sons working with him, representing the family’s fourth generation in the business. Cask began in 1973 as Arctic Grain Ltd., a subsidiary of J.E. Love & Sons Ltd. started in 1905 by Peter Love’s grandfather. Arctic Grain Ltd. opened pellet mills in Churchill, Manitoba and Prince Rupert, British Columbia to export grain screenings from Canada to the UK and Japan, nations that were “ﬁber deﬁcient.”

In 1983 the company changed its name to Cask Brewing Systems to reﬂect its shift to a beer-industry focus. That year it began importing homebrewing kits from the United Kingdom and marketing them to homebrew retail stores across Canada.

See Page 12 of the June/July 2016 Edition of the Ale Street News or download a PDF copy.