That’s the motto for the Richmond, B.C. based brewery Fuggles & Warlock that opened last fall.

For the announcement of the brewery, the brewers decided to keep things weird by releasing a Star-Wars themed video including an epic light saber battle originating from a disagreement over hops. 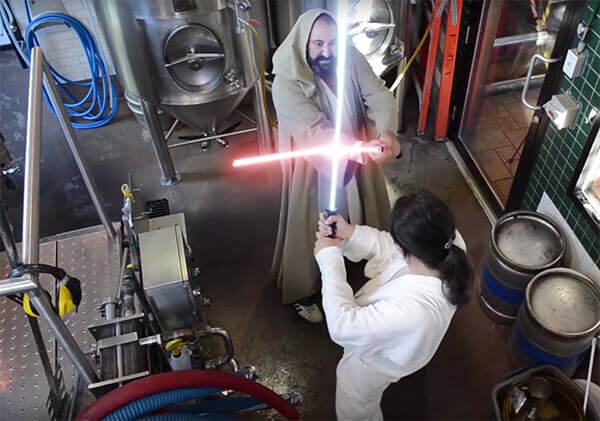 Tony and Dan duking it out in the brewery.

They push traditional styles of beer to the limit, by adding a West Coast flair to their liquid. They produce some adventurous brews aimed toward adventurous palettes. The branding has a distinct focus on “Geek Culture” with references to video gaming and pop culture.

Their 13,000 square foot brewery comes with a tasting lounge.  And if you want to truly geek out you can put down your beer, pick up a controller and access a custom gaming wall, where hundreds of retro games have been stuffed onto eight hard drives for customers’ free pleasure.

They started canning their beer with our Automated Canning System earlier this year. Watch the video below to hear their story first hand from Tony and Dan.

They (Cask) taught us so well that it was just like Rock ‘n Roll.  As soon as they left, we were able to do it ourselves – immediately.

Their core lineup of beers in 6 pack cans include:

Want to ride the aluminum, micro-canning wave?  Please Contact Us.