Uncle John’s Cider Mill has been growing apples since 1858 and producing hard apple cider since 2001. But four years ago the St. Johns, Michigan company proved it’s a craft cider pioneer willing to learn new tricks. How? By squeezing its Uncle John’s Hard Cider into a blasphemous package for the cider trade: the 16-ounce aluminum can.

How strong was the consumer backlash?

Our sales rose by 75% when we introduced cans,” says Mike Beck, a fifth-generation apple man who now heads his family enterprise.

The move to cans enabled Beck to expand his sales and his reach. Prior to micro-canning, Uncle John’s sold about 20,000 gallons of cider in Michigan and the Chicago area. With cans the company has added Ohio, Wisconsin, Minnesota and Ontario to its footprint and boosted its sales past 90,000 gallons.

The first US cider maker to announce a shift to cans and one of the first to put them on shelves, Uncle John’s launched its cans with the very first SAMS machine that Cask sold. Today Beck and his staff can an apple, apple-apricot and apple-cherry cider year round on that trailblazing Cask machine, along with four seasonal ciders made from apple and other juices, all packed in cans from Ball Corporation.

The company added cans to fix a shortcoming.

We were not really making an impact with 750ml bottles,” Beck recalls. “All of my distributors wanted a single-serve package, yet glass bottles didn’t make any sense because of all the extra costs of labels, caps, and cardboard.

The Cask/Ball relationship made the cost of canning affordable for a small producer like me and it allows me to compete better in the market.

Beck admits that canned ciders are not for everyone. “There are some folks out there,” he admits, “that do not like cans, period.” Uncle John’s still offers some of its ciders in 750ml glass for those customers. 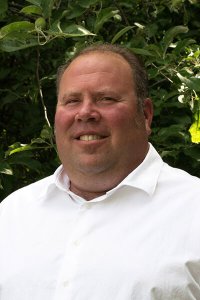 For pro-can cider fans, Beck and his team have a simple approach. “We put some of the best cider in the U.S. in our cans,” he says. Uncle John’s Apple Apricot cider won a best of class award at a recent GLINTCAP judging, and its year-round Apple won best dry cider at the Dan Berger International Cider competition. Beck’s Apple Pear cider took a gold medal in the competition as well. “They beat out many bottled ciders,” Beck notes.

Beck says the freshness-keeping power of cans helps maintain his artwork’s quality for a very long time. “Our canned ciders are not meant for cellaring,” he says. “But cans we’ve kept from our first canning runs years ago show remarkably well.”

Beck is especially proud that he’s in a select group of cider makers that grow their own fruit. “From growing the apples to putting the cider into a can, it all happens here,” he says. To emphasize that fact and its preferred package, Uncle John’s created a unique hashtag for social media: #blossom2can.

Meanwhile Beck counts on cans to help define Uncle John’s as a venerable-but-forward-thinking company in an increasingly crowded cider segment.

We’ve been on the leading edge of cider before it was cool,” he says proudly, “and we hope to stay there through innovation and product offerings. Cans and Cask equipment help us do that.

Want to reap the fruits of micro-canning for your company? Please Contact Us.