Perhaps, as Thomas Wolfe once wrote, you can’t go home again. But with a novel idea and some smart marketing, Mark Hubbard, the founder of Australia’s Blizzard Brewing Company, knows you can recapture the lofty glories of home in a distant setting.  His big idea? “I wanted to recreate the lifestyle I had in Colorado,” Hubbard says, “so I set out to duplicate the Rocky Mountain experience, of ski resorts with a brewery nearby, here in Australia.”

The roots of Hubbard’s dream stretch back to his Denver, Colorado upbringing. While working at a Colorado ski resort, he met a few Aussie ski bums who inspired him to visit their country in 1984. “I came out for a two-year working holiday that never ended,” he says.

But after 30 years in the gold and tech industries of Australia, Hubbard craved a job that resembled his Colorado life. So he launched Blizzard in the Victorian Alps (elevation 1550 meters) in Dinner Plain, Victoria. The brewery opened in March of 2016 at the bottom of a beginner slope just a couple hundred meters from Hubbard’s house.

The combination of high-altitude snow sports and small-batch beer gives the brewery great distinctions, as does its water source.

We make beer from snowmelt and that’s a big part of our message,” he says. “Today’s powder is tomorrow’s beer.

Those unique features allow the brewery to skip exotic beers and focus on classic styles that appeal to resort goers.

When it came to packaging his beer, Hubbard wanted an equally distinctive package. “Cans,” Hubbard says, “show that we’re doing things in a new way, that we’re in the vanguard.” His roots played a role in choosing cans. His brother, an architect in Boulder, Colorado, was very familiar with the Oskar Blues story and the popularity of cans in Colorado and the US. 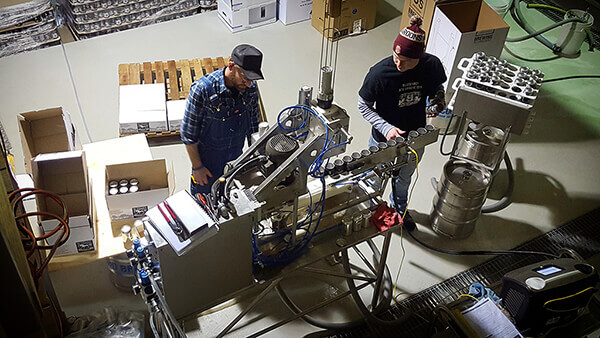 The response was surprisingly good,” Hubbard says. “More craft breweries are canning here now and beer drinkers here are actually searching for breweries that can, because that’s the package they prefer. It’s perfect for skiing, and it’s so much easier for our visitors to grab a slab of cans than a slab of bottles,” he says, using an Aussie term for a case of beer.

Blizzard brews on a 10-barrel system and cans seven different beers on a Cask SAMS machine. The beers are sold across Victoria and are gaining interest from other parts of Australia, and sales have exceeded Hubbard’s predictions. Powering those sales is Blizzard’s smart marketing, which calls its beers “Liquid Powder” and uses “Beer Above All” as its apt and clever slogan. 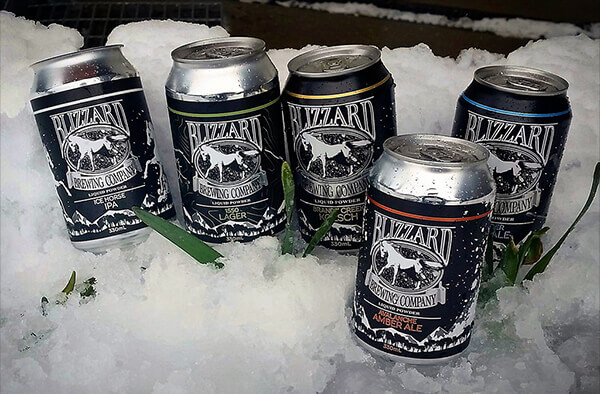 That Australian brewers and consumers are forgoing bottles for cans makes sense to Hubbard.

The canning line is so much quieter,” he says, “it takes up so much less room, there’s so much less spillage. And cans are an all-around better package than bottles to protect craft beer, ensure it remains brewery fresh, and create a better experience for consumers and brewers.

Meanwhile Hubbard’s enjoying the experience of his new career. Blizzard’s Facebook page has video of Hubbard skiing down a snowy slope to Blizzard’s door. “My goal was to be able to ski to work,” Hubbard says. “Now I can do it.”

“Realizing your dream provides enormous satisfaction,” Hubbard adds, “but it comes with a bit of exhaustion because it is bloody hard work to get there. Bringing a Colorado beer-and-skis experience to Australia is similarly satisfying, and I’m glad I am the one to bring it here.”