In early 2007, Maui Brewing Company founder Garrett Marrero and his girlfriend and business partner, Melanie Oxley, were looking to put their brewpub’s made-in-Hawaii beers in a package for the first time. Instead of purchasing a bottling line for the Lahaina, Maui brewpub, the pair bucked the status quo, ordered one of the first Automatic Canning System machines from Cask Global Canning Solutions, and put their beer in the unfashionable aluminum can.

“We felt that cans were a better choice for our environment,” Marrero recalls. “Not just from a sustainability point but literally for our Hawaiian environment with beaches, marinas, golf courses, and places like that. Plus the shipping weight is less. Then we learned about the benefits of cans over glass in terms of beer quality and that there was a local Hawaii can plant as well.”

Maui Brewing filled its first cans in March 2007, squeezing its lushly hopped Big Swell IPA into a 12-ounce can. There were about 1400 craft brewers in the US at the time and just a few dozen of them put their beer in cans. 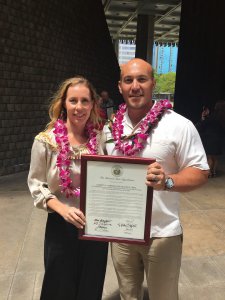 But Marrero wasn’t worried about forgoing glass for aluminum. “We had zero concerns,” he says. “We just knew that education would be a huge deal for us as most everyone at the time — even brewers — thought cans were for junk beer. In the end it was just more work. But as an early adopter we still have quite a bit of street cred when it comes to cans. We helped start a movement instead of follow one.”

That early adopting — along with artful beers that showcased Hawaii’s most revered indigenous products (pineapple and coconut, for example) — helped the brewery flourish. “In Hawaii,” Marrero recalls, “getting a tap handle was crazy difficult due to the influence of big brewers and their ‘local’ beer.  Cans allowed us to gain access to nearly everywhere right away, with little resistance other than ‘Why is it in a can?’ or ‘Do you have bottles?’ Cask and the Cask team,” he adds, “played an enormous role in our success, allowing us to immensely grow our market and volume at a rapid rate.”

In 2010, Maui moved to a high-speed rotary canner and its cans-only focus has continued to fuel the brewery’s growth. Marrero and Oxley (now married) have a new production brewery and tasting room and two brewpubs, and a restaurant will be added at the brewery in early 2018. In May, the Marreros were honored as Small Business Persons of the Year by the U.S. Small Business Administration.

This year the company will produce about 53,000 barrels of beer, and cans have helped it significantly cut its shipping costs as it has expanded its long reach beyond Hawaii to 23 US states and 10 nations.

For craft brewers pondering what package to choose for their beer, Marrero thinks cans are the obvious answer. “If the question is bottle vs can,” he says, “I’d really have to ask what rock that brewer has been living under.”

“With cans,” Marrero says, “you can enter the packaging market at a reasonable price with beer-friendly and environmentally friendly packaging.  Beer quality is of paramount importance and cans are great for protecting the beer you worked so hard to produce. Cans also take up less room, weigh a lot less, are much cheaper to ship. And they don’t make that god-awful noise during packaging.”