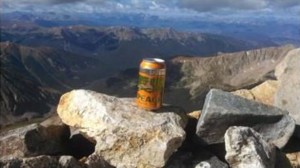 one Tree Brewing Company is named after the town that graciously welcomed the first and only brewery in Lone Tree, Colorado. The warm atmosphere of the taproom beckons patrons with great tasting seasonal and year round hand-crafted beer 363 days a year. It is the place where locals meet the neighbors they never knew they had.

Lone Tree Brewing Company opened in 2011 with the hopes of selling all of the beer their 7 barrel fermenters could produce. In 2012 they surpassed their goals and added two twenty barrel fermenters. By 2013 the brew house expanded again with the addition of six more 20 barrel fermenters. While kegs, growlers and 22 oz. bottles were flying out of the brewery, it was time to create an easier way for their beer to reach the ever-demanding consumer.

Lone Tree Brewing Company decided with the brewery’s location and the consumer’s interest in the great outdoors, cans were the only way to go. Lone Tree beer was ready to head into backpacks and out to the wilderness.

With the reputation of Cask – excellent customer service, compact design and the ability to be mobile fit all the criteria we were searching for. It was time to invest in the Cask Semi Automated Canning system (SAMS),” states John Winter, President and Co-founder of Lone Tree Brewing Company.

The canning operation at Lone Tree Brewing Company began in April of 2014 and two popular flagship beers made their debut. They were an instant success! Sales increased far quicker than they anticipated and two 30 barrel fermenters had to be added to the already burgeoning brewery, just to keep up. Due to the success of the first two cans, the decision was made to can two more styles by the end of the year. This meant a faster canning line. Switching to a fully automated Cask canning line with an automated de-palletizer will increase their productivity and allow the company the opportunity to keep up with the growing consumer demand. As of August 1, they have brewed as much beer (1000 barrels) as they did in all of 2013.

Moving into canning has helped Lone Tree Brewing Company develop from a single tree to a grove of endless growth,” says John Winter.

Cask has been working with the Craft Brewing industry since the early 1980’s and has been building canning equipment for over a decade with more than 350 craft breweries in 25 countries worldwide using our systems. We provide the whole canning solution and offer ongoing support on our canning equipment and the production of cans through Ball Corporation.