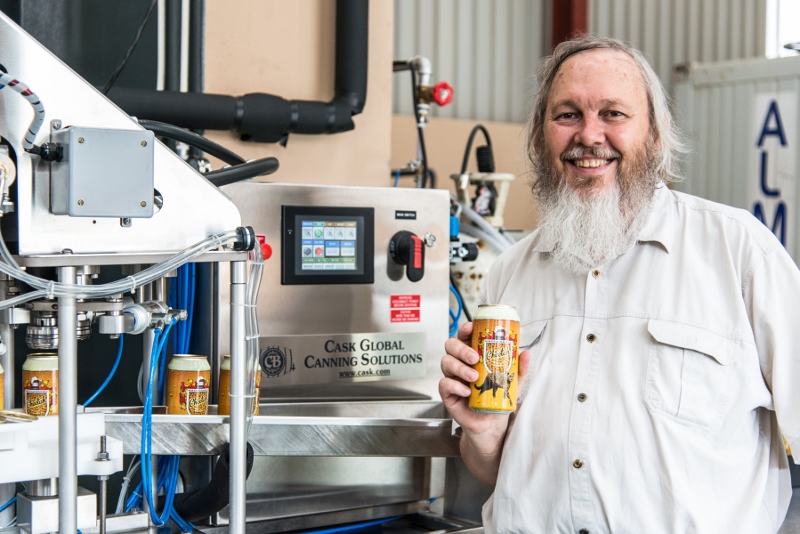 Rudie Kruger, founder of Kruger Brau, standing next to his Cask SAMS machine.

“Ours is a brand new brewery, designed and built by myself,” says founder JR “Rudie” Kruger. “From day one I wanted to establish something extraordinary that makes use of the best technologies that I could afford. This would ensure that my beers are of the highest quality and that I can keep my overhead, operating — and especially my transport — costs low.”

“I also wanted to have a ‘greener’ footprint than the average micro-brewery,” Kruger adds. “That brought me to aluminum cans and Cask Brewing Systems equipment. The aluminum cans give me longer shelf life, a wider distribution radius and great potential for export later on.”

Kruger chose Cask’s canning equipment for a number of reasons.

I’m a mechanical engineer,” Kruger says, “so the design quality, build quality and maintainability over the long term are very important to me. My research indicated that Cask had proven technology and many happy clients.

“For the relatively small size of my brewery,” he adds, “Cask also offers an affordable unit of an appropriate size and capacity. My can supplier was also aware of Cask’s equipment and was very happy about my decision to go with Cask equipment.” 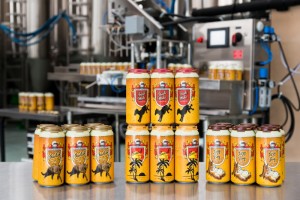 Kruger Brau is the second South African microbrewery to brew and package its beer in aluminum cans. Nottingham Road Brewing has been canning its beers in steel cans for the past two years. In October the brewery shifted to aluminum cans packaged on its reworked, decades-old manual canning equipment.

Kruger’s SAMS machine produces about 40 cases per hour. Along with freshness keeping, portability and transportation, Kruger is excited about the other benefits he’ll reap through Cask gear and micro-canning.

“The visual possibilities of a craft beer can are endless!” he says. “Our beer cans will be unique on the retail shelves in terms of color, shape and size. If a person is shopping for craft beers and is confronted with a row of relatively similarly looking brown bottles, our bright and colorful cans next to those bottles will really stand out.”

In the US where Cask launched its micro-canning revolution for craft brewers in 2002, sales of US canned sixpacks in 2014 were up 97% compared to 14% growth of bottles. “Canned craft beer is the hottest craft beer package in North America,” says Cask founder Peter Love. “Someday that may be the case in South Africa.”

Our canning machines give small brewers an affordable, small-scale way to package their beer,” Love says. “And they allow those brewers to put their beer in a package that’s portable, infinitely recyclable and gives their beer the ultimate protection from light and oxygen. Those benefits are hard for brewers to resist.”

Cask’s compact machines require as little as 16 square feet of space. They also provide an extremely low level of dissolved oxygen (15-20 parts per billion) that extends beer shelf life and protects the flavor profile of the canned beer.

Cask invented the micro-canned craft beer concept. It created the concept in 1999 for brew-on-premise homebrewing operations it supplied in Canada, the US and Australia.

In 2002 Cask sold its first machine (a table-top machine that seamed one can at a time) to a craft brewer, Oskar Blues Brewery & Pub in Colorado, USA. The tiny brewpub was the first US microbrewer to brew and can its own beer. Its cans-only focus made it a fast success, growing from 700 barrels/year to over 149,000 barrels/year in 12 years.

Our canning systems,” Love says, “have helped micro and craft breweries around the world enter the packaged-beer segment and quickly grow their businesses. We’re very proud of that.

Visit www.cask.com to learn more and see videos of Cask’s machines in action.

This Cask original story can also be found on Brewbound.