Micro-canning rises up Down Under

When Ross Terlick chose Cask Brewing Systems gear and aluminium cans for his Cheeky Monkey Brewery & Cidery in Margaret River, his top reason for doing so was simple. “Cans are cool!” says the enthusiastic Terlick, who began brewing in 2012 and canning in October of 2015.

Like Cask’s other micro-canning customers in Australia and around the world, Terlick has also discovered that cans and Cask gear are great for business. 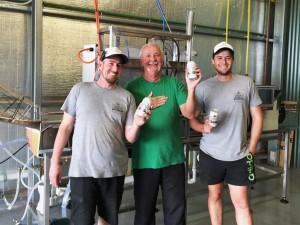 Cask Brewing Systems invented micro-canning for craft brewers in 1999. The company’s first customers were brew on-premise establishments in Australia, Canada and the US. Today Cask’s pioneering, efficient and affordable micro-canning machines are used by over 600 craft breweries, wineries and cider makers in 34 nations around the world.

Cask’s Aussie client list includes Australian Brewery (which led the nation’s microcanning charge in 2012), Colonial Brewing, Green Beacon Brewing, Six String Brewing and Pirate Life. These brewers are enjoying fast growth of their own and many have already moved to bigger Cask gear in order to meet customer demand.

Why are these craft brewers choosing cans and Cask gear?

“The beer is not affected by light or oxygen so it will stay fresher for longer. Cans are also much lighter than bottles so we get more on a pallet when we ship it around, saving us freight and fuel costs.”

“We are absolutely rapt with our ACS machine,” Terlick says.

“We’d reached a point where we were in danger of plateauing if we just continued on as before. The ACS has enabled us to tap into new markets and refresh our brand at the same time.”

“The fact that the ACS had the lowest dissolved oxygen pick up in the range of canning lines out there,” Terlick adds, “was a massive factor in our decision to go with a Cask machine. The smaller footprint of our Cask canning line also appealed to us, as we don’t have much room to spare here.”

Balter Brewing just installed a Cask ACS machine. “We chose to package in cans,” says head brewer Scot Hargrave, “for their superior protection for our beers and for their environmental/sustainability benefits and their light weight and portability.”

These brewers join a list of trailblazing craft brewers that began in 2002 when Cask’s first US customer — tiny Oskar Blues Brewery & Pub, in Colorado — became the first US microbrewer to can its own beers. The brewpub’s cans-only focus made it one of the fastest-growing craft brewers in the US and the 14th largest craft brewer there in 2015.

Cask’s status-quo-defying equipment and rule-breaking brewery customers have transformed the once-maligned aluminum can into the premium craft beer package for discerning brewers.

These brewers prefer cans for more than their freshness-keeping, portability and recycling pluses.

By offering cans,” Terlick says, “we have a great point of difference straight away.

Terlick and his team started with two canned beers and a cider. They now plan to put all of their beers in cans and expand their reach into Eastern Australia.

“From there,” he says, “we will look to take over the world!”

“We created this faster, more-advanced machine,” says Cask founder Peter Love, “to help our customers keep up with huge demand in a fashion that saves them significant money and space. Our focus has always been smaller breweries, the ACS X2 allows us to greatly expand that focus.”

“Cans have become the hottest craft beer package in the US,” Love says proudly, “and that’s becoming the case in other countries as well. We’re thrilled with the success our Australian customers are having with cans and our equipment.”

Micro-canning rises up Down Under